This guide was made by a group of students who were tasked to create a C# language plugin to TMC for the Software Engineering Lab course. We don’t have a deep understanding of the inner workings of TMC, nor do we claim to be expert coders. We created this guide mainly for anyone in a similar position: if you already understand enough tmc-langs and know how to make a test runner for your language, reading this might be a bit redundant. This guide will use our C# language plugin (and some other plugins) as reference, but keep in mind that our solutions to problems are far from perfect. This is very much a ‘how we did/interpreted it’ kind of guide. 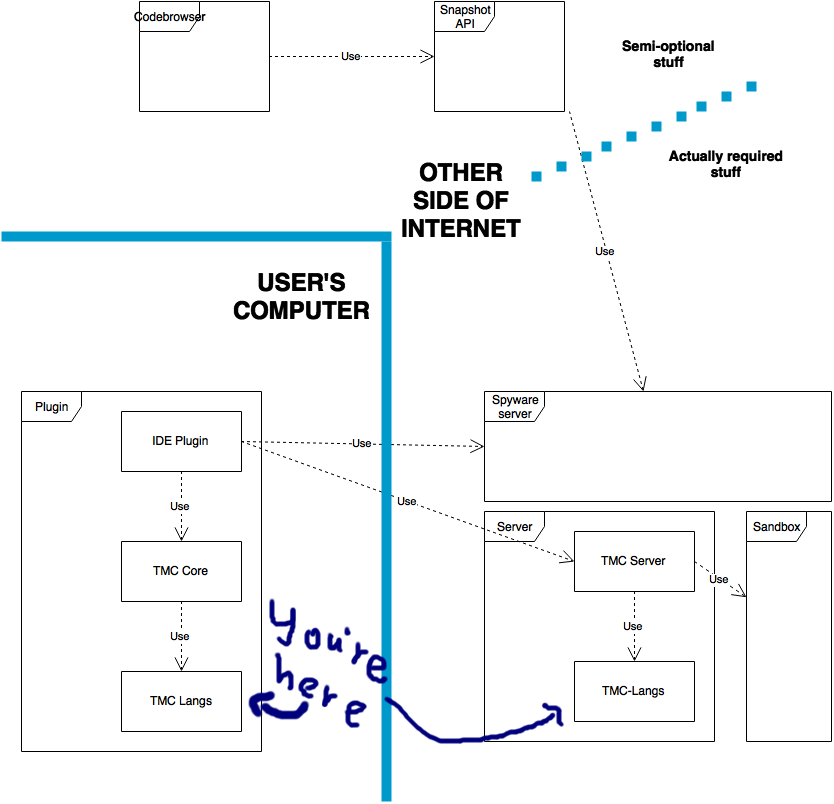 Test My Code (TMC), as you probably already know, is a suite of tools used for teaching programming. TMC has many different moving parts, but the one we need to focus on is called TMC-langs. It’s a handy framework for TMC language plugin creation that makes adding support for new languages a lot easier. To develop a new language plugin you should fork the tmc-langs repository and start developing your plugin there, since it contains all the parts you need to change and it compiles into a package that you can swap with existing TMC-langs versions for easy testing & use. 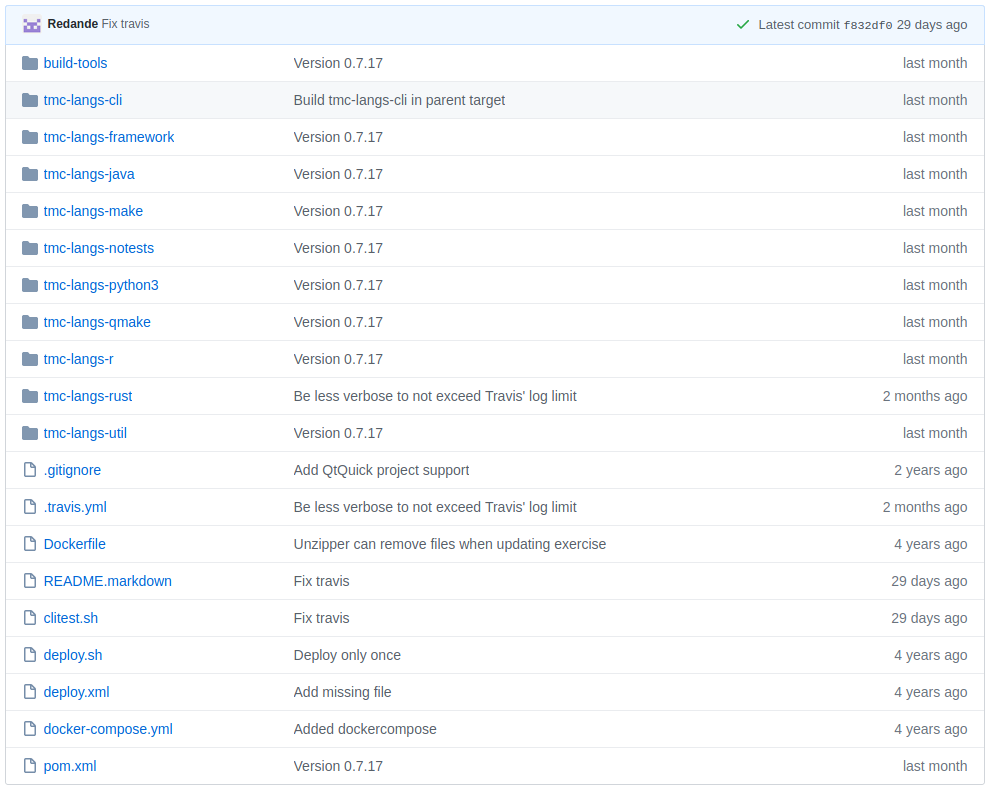 Above you can see the structure of the TMC-langs repository. While the picture doesn’t include our C# plugin you can probably see that to add support for a new language you need to add a new module (written in Java) for your language to the list. More about what it’ll contain later.

The other part you need to develop in addition to your language plugin in TMC-langs is your test runner. The test runner is the application that actually runs the unit tests that test the student’s program. For this you need to select a unit testing framework for the language you are implementing, which will then be the test framework that the course instructors use to write the acceptance tests for exercises. For example in our project we chose xUnit and the Python plugin uses unittest, but these are of course language specific.

In the above diagram the area around the runner and the unit tests is marked as fuzzy. That is meant to highlight the fact that how your test runner will interact with the unit testing framework you choose can differ between languages and frameworks. The runner will need information about the test results but how the test framework reports those results to the runner depends on the framework.

The runner’s job after the testing has concluded is to parse the test results into a .json file that TMC-langs will read and then forward to other parts of TMC. Note that the only ways TMC-langs and the runner interact are TMC-langs’ invoking of the runner (via command using Java’s ProcessBuilder, nothing fancy) and the runner creating the results .json that TMC-langs then reads.

This also means that you have a greater freedom to implement the runner the way you see fit. While the language plugin has to inherit an abstract plugin class and should adhere to the style of other language plugins, the runner only needs to run the tests on the program (this can include compiling the program if your language is a compiled one) and produce the resulting normalized .json, the ‘how’ is up to you. Of course you should still make the runner simple and well written, especially considering performance and platform compatibility since TMC aims to make programming courses more accessible and scalable.

One of the two main components needed for TMC language support is the language-specific implementation of the tmc-langs -framework. Strictly speaking, only two classes need to be made for the tmc-langs side of language support to function: a Plugin and a StudentFilePolicy. However, it is advisable to also implement two more classes for parsing the two different result files the test runner can create, an ExerciseDescParser and a TestResultParser.

The Plugin class is the main component of any language support implementation. It’s a class that extends the framework’s AbstractLanguagePlugin (abstract) class, which in turn implements the LanguagePlugin interface. The plugin is responsible for all the major tasks expected of a language support implementation, such as recognizing a directory as a valid exercise directory for the language and running tests for a given exercise directory and returning the results. A number of methods have to be implemented in the Plugin class.

The way this should be implemented is going to be highly language-specific, but some good methods are using Files.exists to check for specific directory names and Files.walk with a PathMatcher object to look for specific file extensions that are particular to the language.

Returns the language/plugin name as a string to be printed during execution. Another one-liner method with nothing notable to mention.

Produces an exercise description of an exercise directory, finding the test cases and the points offered by the exercise. This involves initializing the language-specific test runner into a ProcessRunner object and calling it with a specific command-line command to scan the exercise and write results into a json file. The generated json file must be parsed into a ImmutableList

Used for cleanup such as deleting unneeded files after executing a task. This could mean the equivalent of executing ‘mvn clean’ for a Java project, or for instance deleting binaries generated by the test runner. With the tmc-langs command-line interface, clean is executed with a separate command ‘clean’.

A method for determining whether the file specified by Path is a program source file. According to the official documentation: “A file should be considered a student source file if it resides in a location the student is expected to create his or her own source files in the general case.”